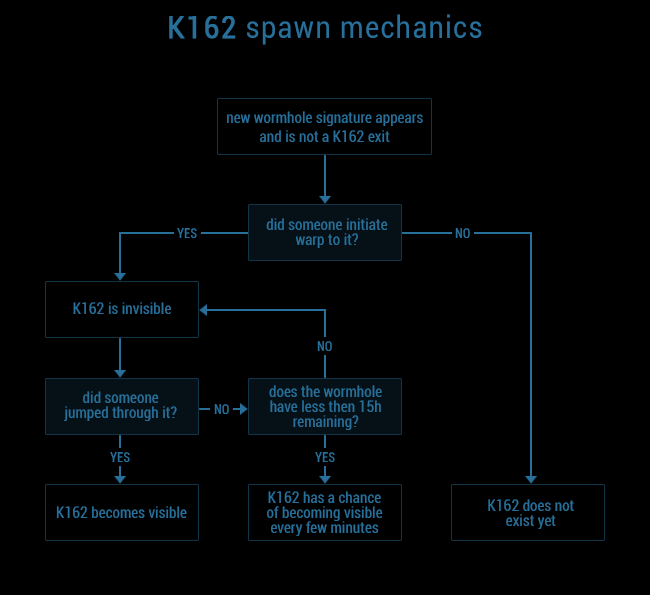 Hyperion expansion (Aug 2014) patch note:
> K162 apperance only on first jump (or after first warp and less than 15 hours remaining)

Use this tool to identify your wormhole connection by type.

whtype.info tool is the result of a continuous scanning project focusing on Anoikis space.
Check attributes of any wormhole type in EVE, or select different attributes as filters to track down your wormhole type.

Initial data was pulled from Anoik.is, EVE Ref, UniWiki and several other sources.
All information is crosschecked, updated and verified by constant scanning and on grid observations.

Feedback appreciated on this EVE-O forum thread where I post newly added updates.

Static - repeatedly respawning wormhole connection in a given j-space system.

EOL - end of life; wormhole connection with less than 4 hours of its lifetime left.

Destab - wormhole connection with less then 50% of its mass remaining (destabilized).

Crit - wormhole connection with less than 10% of its mass remaining (critical).

Shattered - wormhole systems in which all planets are shattered, and any structure is unable to be anchored.

Roll - putting enough mass through a wormhole to collapse it.

Rolling battleship - a battleship of any race fit with a Higgs Anchor rig and battleship propulsion module for rolling wormhole connections.

Hot pass - jumping thorugh a wormhole with propulsion module on, which increase the ship mass.

Eviction - act of sieging, destroying and ultimately taking over an enemy wormhole system.

Hole control - Holding control of all incoming and outgoing wormhole connections during an eviction to stop enemies from getting in or out.

Doorstop - A ship sat on the outside of a crit wormhole connection with enough mass to roll it instantly, used to stop defenders or attackers from bringing in reinforcements.

K162 - other side of every wormhole type.

Bob - egregore, thoughtform, meme and a wormhole god. That is all.

All EVE Online related materials are property of CCP Games.

This site use cookieless analytics for visit count purpose.

It appears that wandering medium sized wormholes, thought to appear only in Class 1 systems, spawn in NullSec too.
If you find any of the following wormhole type in NullSec, feel free to send your report (screenshots included).